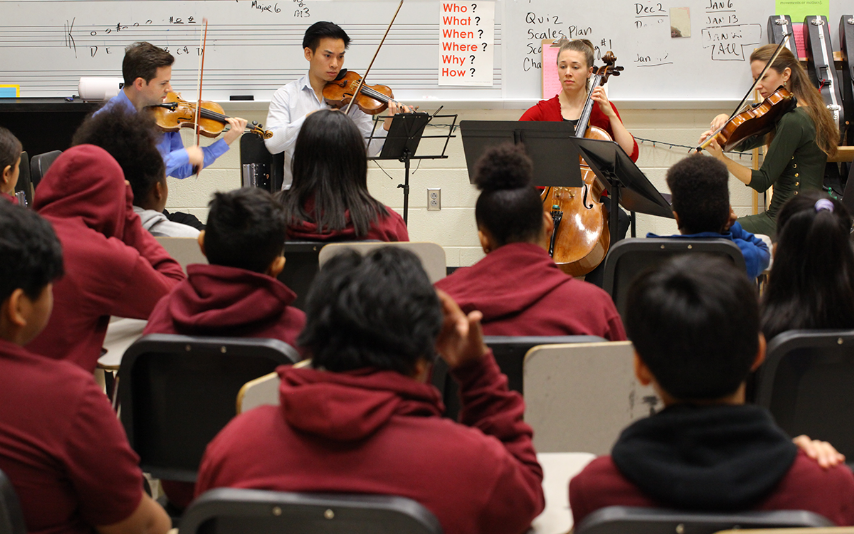 ×
MARIA TUKEVA’S (MT) MESSAGE:
MEETINGS THIS WEEK:
Thursday, January 2, 2020
Department Planning Period Mtgs
ANET Window Opens
Friday, January 3, 2020
No Meetings
Extended Day Mtg 3:30pm–5:30pm
Monday, January 6, 2020
No meetings
Tuesday, January 7, 2020
SLC Morning Meetings
Wednesday, January 8, 2020
SLC Morning Meetings
Department Planning Period Meetings
Math Affirm Test #2
Street Law Recruitment Auditorium 2pm
Thursday, January 9, 2020
ANET and AP Interim Schedule
Department Planning Period Meetings
Faculty Meeting – 3:30 PM
High School ANET ELA
AP English Essays
Friday, January 10, 2020
ANET and AP Interim Schedule
ALT Meeting 7:30 a.m.
MS ANET ELA
HAPPY 2020!  LOOKING FORWARD TO SEMESTER 2
Welcome back to all faculty and staff from Holiday Break!  As we end the second advisory, over the next three weeks we will be assessing learning through portfolio presentations and interim assessments. This is the time to engage students in reflection of what they have learned, and to differentiate instruction through station work so that students can work on the standards they need to improve. The end of the advisory provides for a powerful opportunity for students to synthesize what they have learned, and demonstrate how they can transfer their knowledge into new settings and contexts.
SHOUT OUTS
INSTRUCTION: 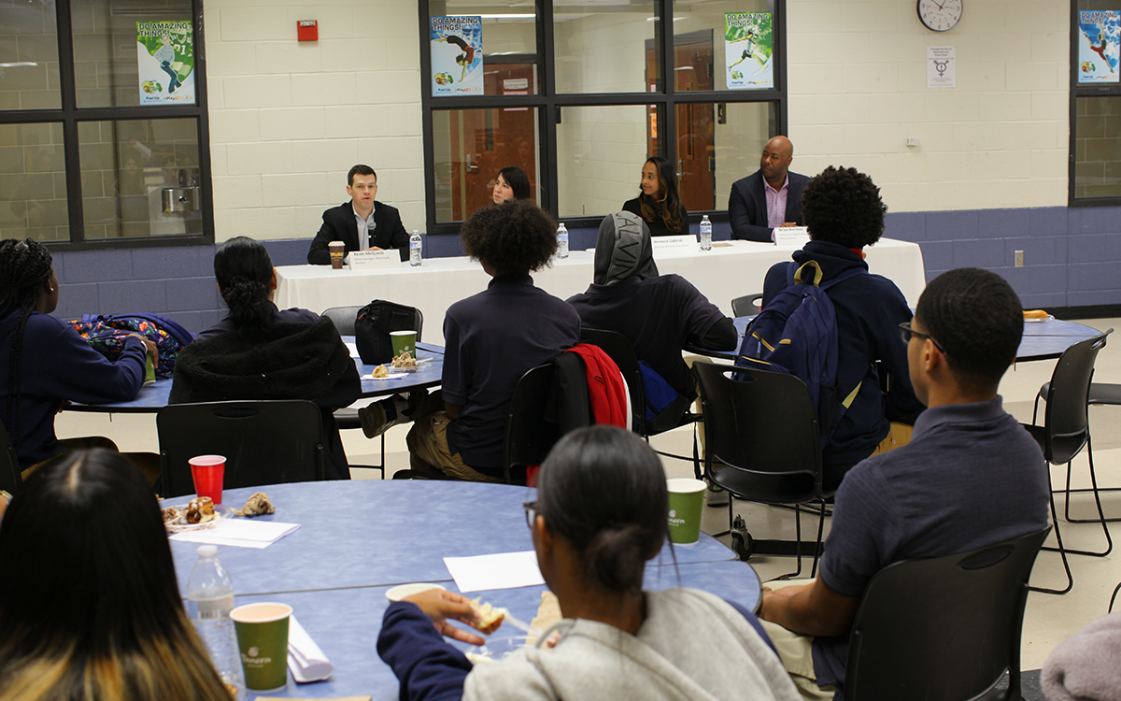 INSTRUCTION
This is the eighth week of the Second Advisory! After break, it is important to maintain a sense of purpose and focus to classes, so that students find value in attending. We must be delivering full lessons every day, every period, and communicating this to students. This will ensure that our attendance stays high, and that students continue to learn. Please make your lessons for the two days when we return, some of your most compelling and interesting lessons! When we return from break it will be time to complete and revise the current GRASPS, and begin to prepare students for portfolio presentations and exams.
INSTRUCTIONAL CALENDAR
The Instructional Calendar is a living document that houses all of the major curricular requirements, assessments, and schoolwide events. Please check it weekly, as it changes as events are added or moved. Please note some additions - the specific dates for each interim have been added, so please check out the calendar! The calendar is curated by members of the Admin team, and Mr. Magee, Science LEAP lead, curates and adds events or items that are submitted by Department Chairs. If you have an event or item that you think should be added to the Instructional Calendar, please submit it to your Department Chairperson first, and then your Department Chair will submit for inclusion if appropriate.
Instructional Calendar
WAMU | Dec 20, 2019
Teaching History As Impeachment Unfolds
Debbie Truong 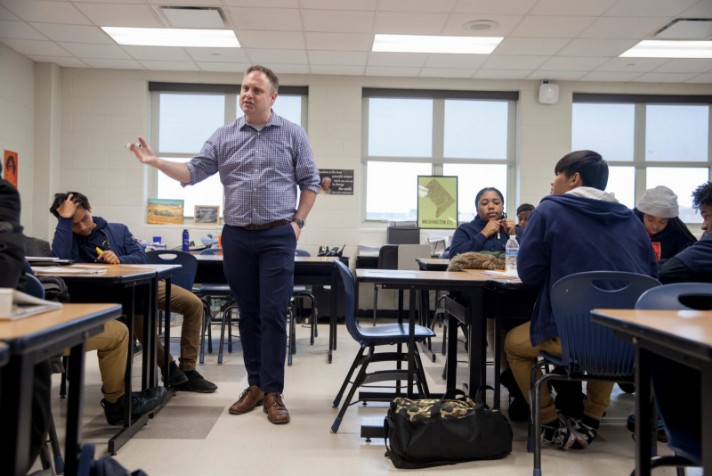 George Connor leads his government class at the Columbia Heights Educational Campus in a discussion about the impeachment process.
Tyrone Turner / WAMU
George Connor strolled the aisles of his fourth-floor classroom, prepared with an assignment.
“Give me a list of horrible things that could probably get a president removed from office,” he asked the 12th-grade students in his class at Columbia Heights Educational Campus on a recent weekday morning.
Answers flowed from the teenagers.
Laundering money, one said. Abuse of power. Sexual misconduct. Interfering with elections.
“Gee, I wonder where we’re getting some of these ideas from,” Connor quipped.
In ordinary times, the 36-year-old teacher would spend a brief part of his U.S. government course explaining impeachment. But these are not ordinary times.
President Donald Trump was impeached by the House of Representatives Wednesday night on a mostly party-line vote, prompting a Senate trial on abuse of power and obstruction of justice charges.
Connor and other social studies teachers are teaching history as it unfolds. In classrooms across the D.C. region, they are bringing lessons about checks and balances to life with real-world examples. They are airing clips of impeachment hearings in class, challenging students to draw parallels between the Trump era and other presidencies. 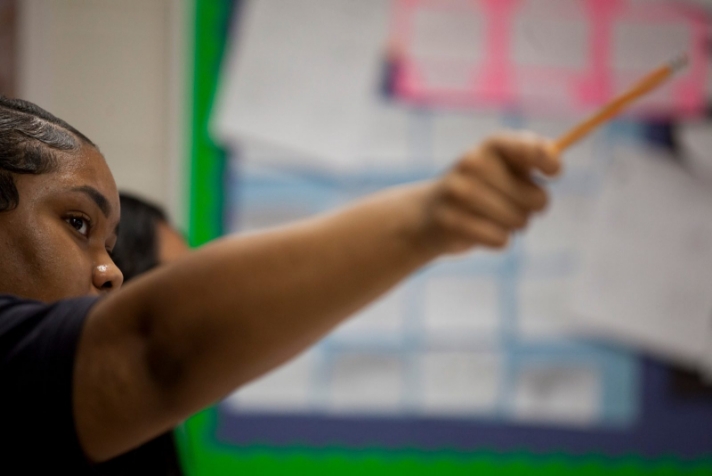 A student at the Columbia Heights Educational Campus points during a lesson about impeachment.
Tyrone Turner / WAMU
President Trump is the third president in the nation’s history to be impeached. The two others — Bill Clinton and Andrew Johnson — were eventually acquitted in a Senate trial, the expected outcome for the current president.
The latest impeachment inquiry involves allegations that Trump withheld military aid to Ukraine to secure an investigation into former Vice President Joe Biden, a potential 2020 political rival.
The complicated and highly divisive process can lead to fraught discussions in class. Teachers say they are careful to remain objective and render facts about the procedure without injecting personal beliefs.
“I don’t want to be accused of trying to influence students with whatever my political leanings or biases may be,” said Todd Smith, chair of the social studies department at Southern High School in Harwood, Md. “I generally tend to be kind of reserved when it comes to talking about modern-day politics, because it can get so heated, it can get so contentious.”
Smith, who teaches in a rural, Republican-leaning community, said he has not heard many students talk or ask about impeachment on their own.
But the topic has emerged in lessons about checks and balances and the rule of law. After the House of Representatives voted to impeach Trump this week, Smith devoted half a class period to cover the vote and the process moving forward.
“That’s historic stuff,” he said.
In liberal Arlington County, social studies teacher Michael Palermo said he thinks his students are paying close attention.
During lessons about the Enlightenment, Palermo said he usually introduces students to Montesquieu’s ideas on the separation of powers. And in the past, he has used impeachment as an example of a legislative check on the president’s power.
“Now that it’s happening, that’s something that I can point to that they’ll be able to understand, they’ll be able to connect with better,” said Palermo, who is planning on holding a simulation of the Senate trial in class.
Even before the inquiry into Trump’s dealings with Ukraine, his presidency and the hyper-partisan political climate have affected the way some teachers talk to students and teach government.
At the Columbia Heights Educational Campus, Connor still explains how a bill becomes a law. But he also feels he has to talk about how political gridlock has prevented Congress from passing laws.
After Trump was elected in 2016, Connor said the mood on campus was “somber.” The city is heavily Democratic and students at the school are majority black and Hispanic.
He strives to remain apolitical while calming students’ fears about immigration crackdowns and the threat to Deferred Action for Childhood Arrivals program, which allows children who were brought to the country illegally to stay in the United States.
It’s the first impeachment any of the students in Connor’s class have witnessed — the teenagers were not alive in 1998 when Clinton was impeached by the House and later acquitted of perjury and obstruction of justice by the U.S. Senate. 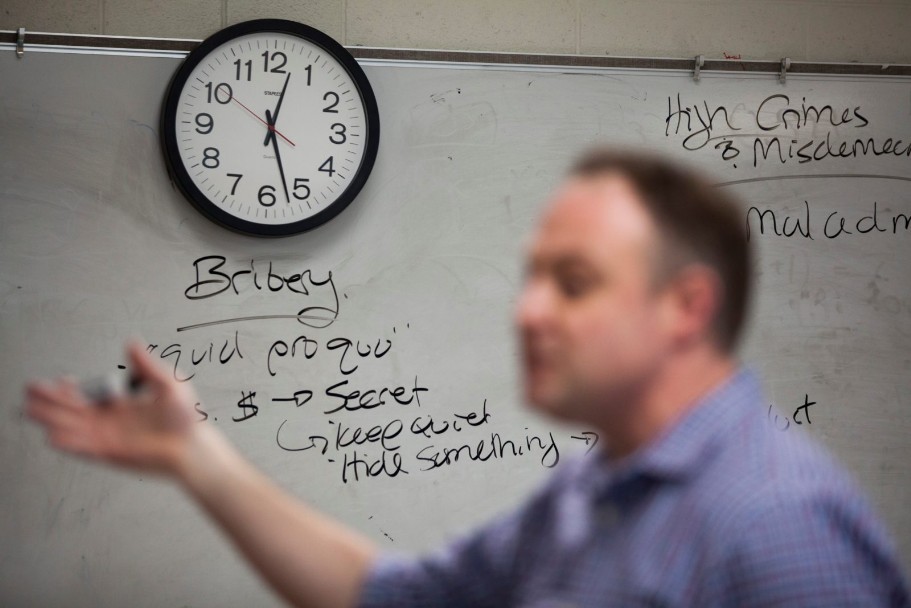 Connor asks students what they think could get a president impeached.
Tyrone Turner / WAMU
The teenagers are learning just how tough it is to remove a president from office.
“Growing up, I thought a group of people would vote or agree that this president is doing something wrong and that he would just be kicked out,” said Jonathan Mendez, a 17-year-old. “It’s actually a great deal of process that they have to go through.”
Kayla Strong, a 17-year-old who wore an Obama sweatshirt, said she feels politicians sometimes use their platforms for the wrong reasons. They spout mean spirited thoughts on Twitter. They make rude comments at inappropriate times.
She said she feels the impeachment process is a respectful, orderly way for politicians to convey their thoughts. 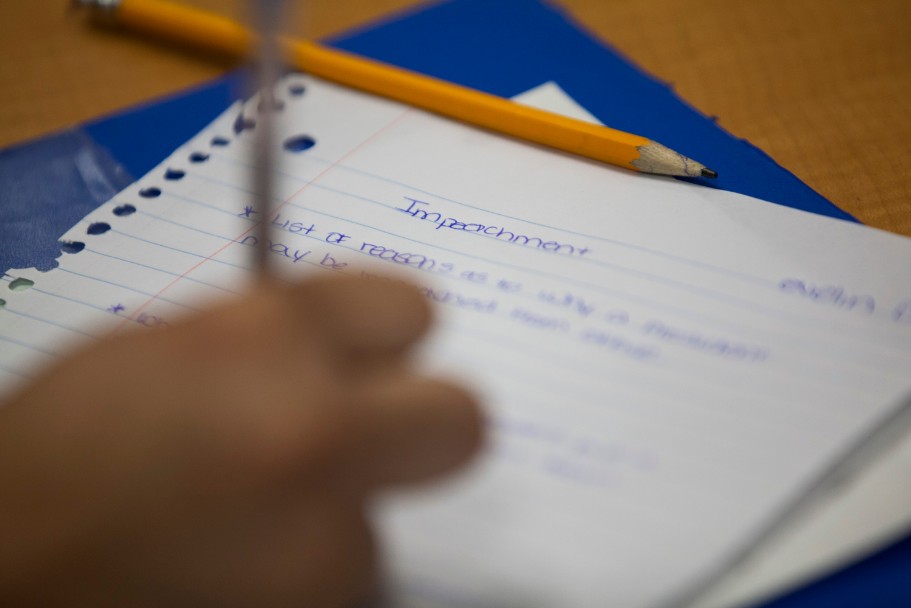 A student at the Columbia Heights Educational Campus takes notes in a class discussing impeachment. The teenager said she thinks impeachment was “a long time coming,” citing the sexual misconduct allegations made against the president and the Russia investigation.
Tyrone Turner / WAMU
“He’s the president, but I don’t think anyone should be above the law,” Strong said.
The Senate trial on abuse of power and obstruction of Congress is expected to begin in January.
When the time comes, Connor and his students will be paying attention.
OPPORTUNITIES: 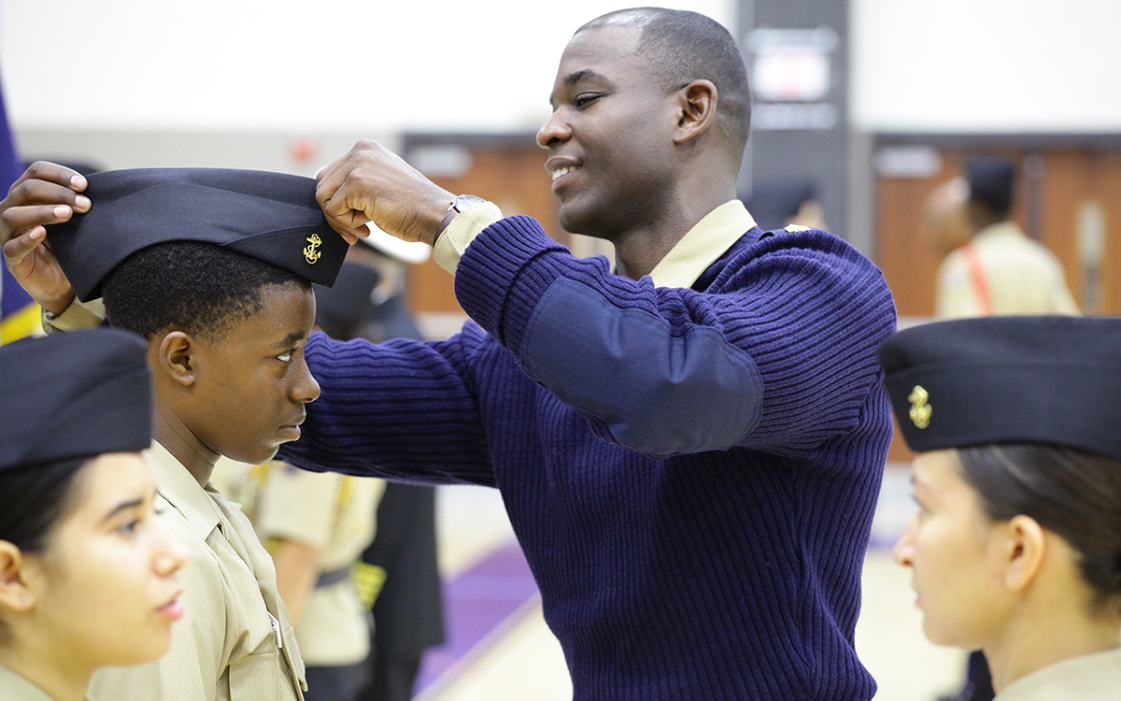 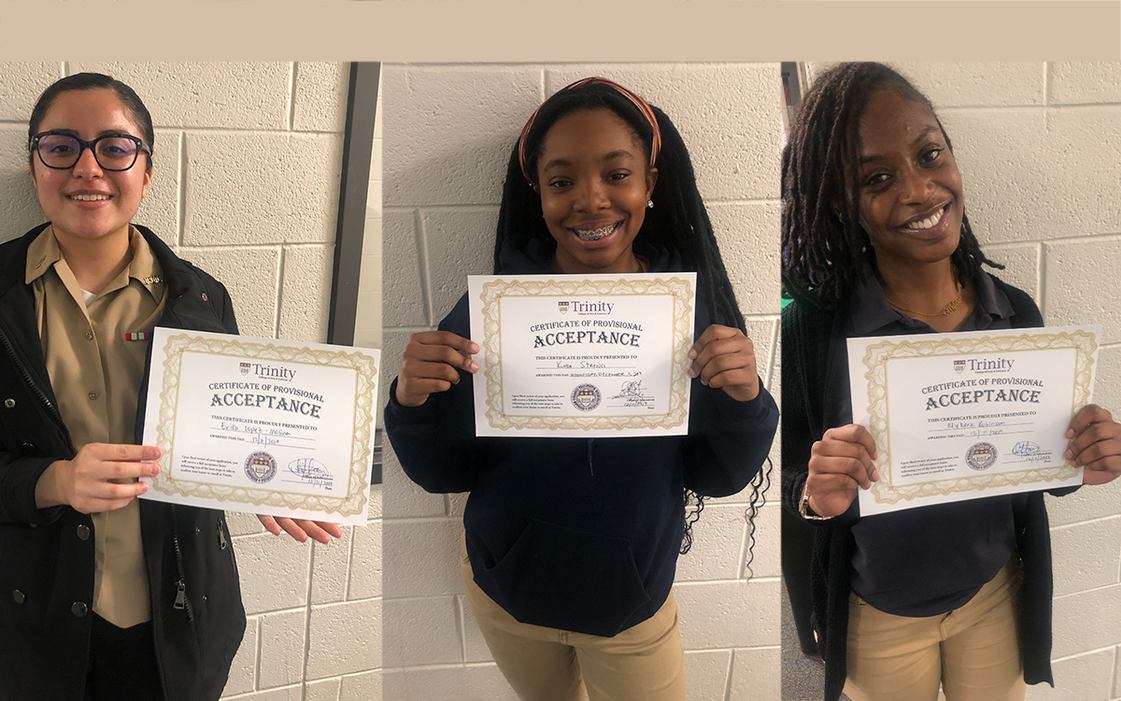 TRINITY UNIVERSITY ACCEPTS ERIKA LOPEZ MOLINA, KAYLA STRONG AND MYKERA ROBINSON
BEHAVIOR REFERRAL LINK
Below is the Google Survey/Referral link that the entire CHEC school community will be using to send behavior referrals. If you have any questions or concerns please reach out to your appropriate Dean directly.
High School - Dean Boone - dewayne.boone@k12.dc.gov
Middle School - Dean Avila - kathrine.avila@k12.dc.gov
Student Culture Intervention Form - Behavior Referral: Please use this link to send any behavior concerns after using the 5-step discipline process and any care system you have in place to support your student's social-emotional learning. You may also use this link to bring to the Dean's attention the need for a restorative circle and/or when students are tardy to your class more than three times. The Dean Team will actively monitor this live document to support all teachers.
https://docs.google.com/forms/d/e/1FAIpQLSegKHVWIDKLefDQoXjJWPGx5kRT5PdamOTYxZdXTTsJvZAI6A/viewform?usp=sf_link
REMINDERS
Students that are Out-of-Area
During the past school year, we noticed a pattern of middle and high school students wandering into the wrong school. For this new year, please be mindful that Middle School students should not be in the High School at all, and certainly not without a pass. High School students should only be in the Middle School on the Lincoln 3rd floor. The route for High School students to the 3rd floor Lincoln is through the Bell 2nd floor and on to Lincoln 2nd floor landing and up the stairs to the 3rd floor.  They should not use the 1st or 2nd floor Lincoln to get to the 3rd floor Lincoln. Students that are not complying should be written a referral, so they can earn a consequence.
Detention
Detention is a first intervention we have for students to check and correct their behavior in your classrooms. Students being informed of this consequence is vital to the effectiveness of the consequence.  Remember to use our 5 step process with fidelity so that our students will not earn a greater consequence of ISS and thus lose valuable class time
Dismissal
We always need more support at dismissal from 3:15pm until 3:35pm (High School), 4:15pm until 4:35pm (Middle School). Please follow students all the way out to the front of the building. Students should be encouraged to move on toward their bus stops/metro quickly. Teachers and staff that can make themselves available to stay out front will be greatly appreciated.
Cafeteria Support
All lunches have their ups and their downs. We always appreciate additional supports in the cafeteria on days that teachers are available. Check-ins with students build relationships and adult presence supports our daily procedures in lunch.
WEEKLY SPORTS UPDATE
Athletics are an integral part of the educational program and a means to accomplish the goals of education. Our athletic program exists for the welfare of students and the contributions it makes to their educational experience.  Athletic participation builds self-esteem and confidence and provides the necessary tools for success.  The interaction between individuals on the fields of sport teaches students the value of teamwork, while developing the proper competitive spirit, combined with a sense of fairness. 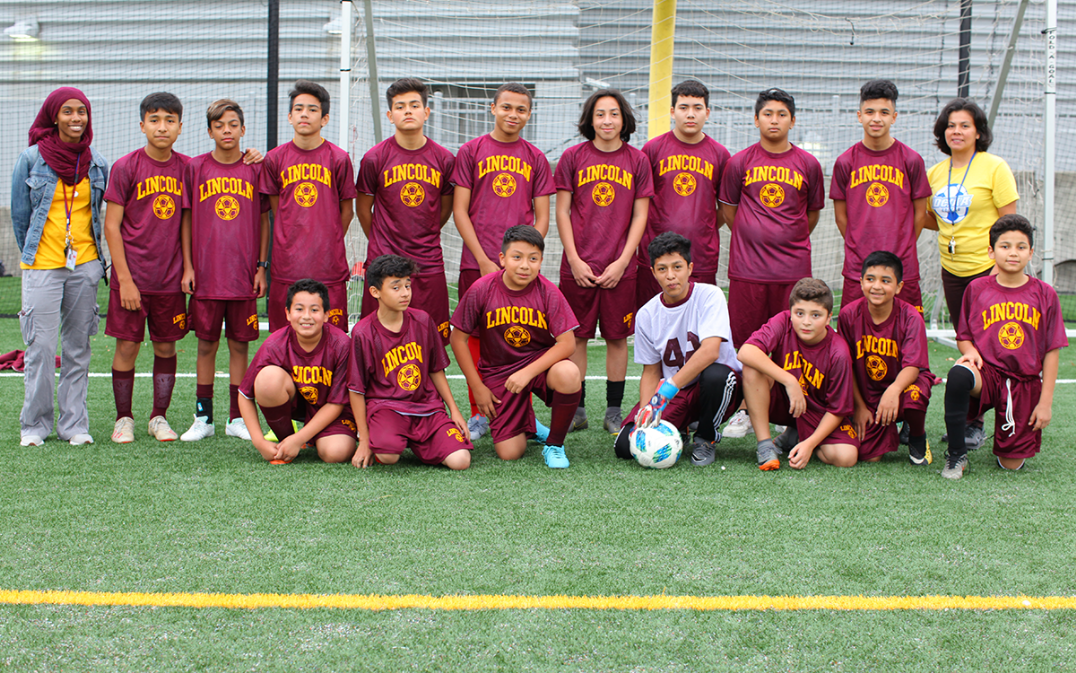